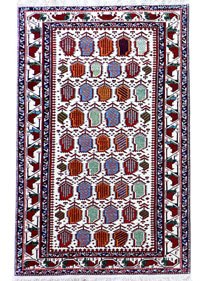 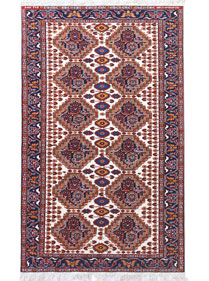 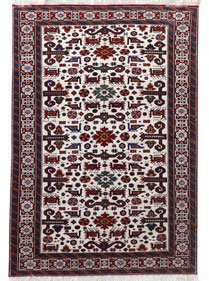 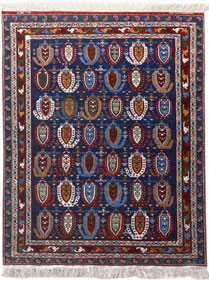 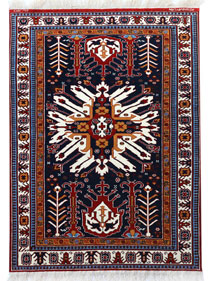 “Zilli” is an interesting variety of flat-woven carpets. They are characterized by stylized forms of animals and vegetal elements. In terms of their composition and pattern the Azerbaijani zillis are very diverse. They feature a plastic flexibility of the pattern and emotional expressiveness. As to their technical and artistic qualities, “zillis” are rich in moving images of stylized birds, elaborated “butas” and other elements. “Zilli” were obviously influenced by the tendency to fill in the space by various motifs, each being repeated in the field according to its individual layout, and the overall result resembles a fancy garden with a rich and fairy-tale flora.

Kilim is the most widespread type of flat-woven carpets. They are made by passing the weft through the warp using the technique of compound interweaving. Kilim is characterized by a slot-like gap (opening) around the geometrical patterns. The technique of kilim weaving predetermines the pattern shapes in the form of a lozenge, triangle, trapezium. The pattern is traditional, in the form of large and small lozenge and hook-like elements, which are rather expressive and dramatic

The “Sumakh” carpets present one of the interesting types of flat-weave carpets, which have become widely spread and recognized over the last few centuries.The technological peculiarity of “Sumakh” lies in their rich composition and colors. The diverse stylized vegetal motifs, various geometrical elements such as large hexahedral, square, rhomboid medallions impart festive beauty to “Sumakh”. The traditional pattern includes the minor edge with a wave-like pattern, which is called “dolan-gach”.

Palas is one of the widely spread flat-weave carpets. The palas weaving process consists in passing the weft through the warp by a simple technique. The weavers decorate the palas by traditional patterns in the form of horizontal stripes commonly used throughout Azerbaijan.